Kingsford The Barossa has a minimum of a two nights stay requirement that allows you to immerse yourself in the full experience. We are now open from Wednesday through to Sunday, including Sunday nights of long weekends.

The History of Kingsford

Kingsford The Barossa has a rich heritage dating back centuries. Pastoralist, Stephen King, commissioned the two-storey, Georgian-style sandstone house in 1856 – it’s thought that the stone transported from Edinburgh as ship’s ballast. Every chapter of their intriguing story since speaks volumes about the character and timeless charm of the historic homestead.

Pre-1836, before British settlers arrive to survey and fence what they consider 'terra nullius', the Wirra people walk and hunt on these lands, as they have for thousands of years. They call the area 'Mincalta'.

In 1838, Lincolnshire man Stephen King boards the ship Orleana and sails for South Australia, a convict-free colony where settlers are granted land and the freedom to worship. King acquires a parcel of newly-sectioned land north of the Para River where he runs 3,250 sheep. His first house was built on a small area to the west of the property.

Enjoying new-found status and success, King commissions the construction of a substantial two-storey house made of sandstone in 1856. He calls it 'Kingsford', meaning 'King's crossing'.

Matilda King, the daughter of Stephen King who founded Kingsford, was a pioneer in her own right. She was one of the first women to paint South Australian native flowers and helped establish the Adelaide Botanic Gardens.

Frederick Scarfe occupied the property in the late 1800's. The property changed hands several times, bought by individuals and syndicates who persevere with livestock and crops.

Originally built in 1856, the Stonemasons worked hard to build the original Homestead. The property has seen many important trades who have worked extremely hard to shape the property into what it is today.

The Fotheringham family occupied the property from the 1940's up until 1999. The convivial septuagenarian Tony Fotheringham remains a close friend of the Ahrens family and occasionally visits to share his Kingsford passion.

The year was 2000 and Channel Nine, then owned by Kerry Packer, acquired Kingsford after long-term owner Tom Fotheringham had sold the property to the SA Government, who used the property as a Montessori preschool. Filming on 'Drovers Run' continued for seven years and produced a total of 224 episodes viewed in over 41 countries.

The Ahrens family purchased the property in 2009, and performed a substantial and lengthy renovation to a property left in neglect. A boutique luxury accommodation venue was opened as 'Kingsford Homestead' in 2012. The name paying tribute to it's predecessors.

In 2020, a new era of Kingsford was brought to life. Stonemasons from South Australia came together to pay homage to all that was done in 1856, without the tools and gadgets of today. A major extension of Kingsford began including wine vaults, lodge, bars, conservatory, new suites and a Kegelbahn bowling alley.

The physical transformation of Kingsford is extraordinary, and each person that returns from a visit, gushes at and praises what has been achieved. The name change from Kingsford Homestead to Kingsford The Barossa is equally as profound. For it is a statement of the pride the Ahrens family has for the region that is their home.

The History Of Kingsford

Prior to 1836, the country around what is now Kingsford would have looked very different. In place of the paddocks, wheat stubble and introduced livestock, there were only native species of animals and plants. These would have been fertile lands for the native Wirra people, who seasonally passed through for food, water and possibly ceremony. They called the area ‘Mincalta’.

After 1836, South Australia was ‘free-settled’ by British and later Prussian (now German) colonists who wanted freedom of worship and a chance at a prosperous life. Lincolnshire man Stephen King left Britain aboard the ship Orleana in 1838. After alighting in Adelaide in 1839, he joined a syndicate in acquiring a parcel of newly-sectioned land north of the Para River – the beginnings of a settlement called Gawler. This now-substantial town lies 5km to the southwest of Kingsford.

King was an educated man, a pastoralist and an entrepreneur. He built the town’s first steam-powered flour mill and settled a 500-acre parcel of land to the north on which he ran 3,250 sheep. His first house was on a small property of called Mincalta which still exists to the west. Business was good and in 1856 he commissioned the construction of a substantial two-storey house – one built to reflect his new status and success.

It is believed King himself was influential in its design, working with a very able stonemason. Much of the house exterior you see today conforms to the original build, a sandstone structure in Georgian style. The stone is thought to be from Edinburgh, brought out as ship’s ballast.

Original features within include the splendid cedar staircase in Gothic style, the slate flagged entrance hall and the ‘buffet’ – a large sideboard-like feature that opens to reveal steps down into the stone cellars. The cellar was used to store produce (delivered through a chute) and was said to have once held bushrangers who’d ‘bailed up’ (held up) the homestead.

The original coach way to the property came from the east, ultimately serving the entrance to what is now the Matilda Suite. When a track from the west became the preferred access, the turreted porch – also in Gothic style – was added to form the main entrance.

Kingsford was a watering point for coach companies, drovers and bullock teams passing through the region, However, the property lays claim to a special part in Australia’s pioneering history.

In 1861, John McDouall Stuart left on his sixth and final expedition in a bid to cross the continent. The party went through Kingsford, for reasons other than water and rest: 19-year-old Stephen King Jr, one of Stephen and Martha King’s 11 children, made the epic 6000-kilometre (3,800-mile) return journey with Stuart. King Jr’s cousin, William Billiatt, also joined the expedition.

South Australia’s history is very much about boom and bust, and the 1860s saw a severe drought. In the middle of the decade, King was forced to sell the property and seek employment with the government. In 1865 he became Special Magistrate for the Government at Port Augusta and Melrose, and later became an inspector of timber in Western Australia, responsible for importing jarrah for the South Australian Railways. Part of the original hallway of the homestead was built with that same jarrah.

King suffered ill health and retired to Adelaide, where he died in 1882 aged 76.

Kingsford was acquired by John Howard Angas, the son of South Australian founding father George Fyfe Angas, who raised Hereford cattle on the property. It then went to a syndicate of owners and back to the Angas family in 1924, this time under Sir Keith Angas.

Subsequent owners continued to raise livestock and crops on the property, up to the Fotheringham family who owned the place until 1999. The convivial septuagenarian Tony Fotheringham is a tremendous source of knowledge on the property and we’re delighted he occasionally visits to share his expertise with guests.

Perhaps the property’s most unusual role was as the central location of Channel Nine’s drama series McLeod’s Daughters, written by Posey Graeme-Evans. Kingsford was bought from Mr Fotheringham by Channel Nine (then under Kerry Packer) to stand in as ‘Drover’s Run’, a property inherited by two wayward daughters. The set was closed off for seven years of production and run much like a working farm for the purposes of filming, complete with 100 cattle, 250 sheep, 15 horses, working dogs and a team of stockmen. Interior scenes were filmed inside the homestead and outbuildings on the property, including ‘Meg’s Cottage’ next to the main house.

It’s not widely known, but the show was going to be called Drover’s Run until Kerry Packer vetoed the name. A total of 224 episodes of McLeod’s Daughters were viewed in 41 countries. The last episode was filmed in 2008.

By then, the old homestead was in a state of severe disrepair and suffering structural problems.

In 2009, it was bought by Stefan Ahrens (CEO of the Ahrens Group – www.ahrens.com.au) and his wife Leanne. The Ahrens family has been part of the Barossa for over a century – so Leanne and Stefan took special pride in rescuing and revitalising one of the region’s oldest and most significant estates. As it happens, Stef had played in the old property as a child.

In 2012 they opened it as a five-star accommodation called ‘Kingsford Homestead’ and attracted guests from all over the world. It also quickly became a popular wedding and celebration venue for people from far and wide.

In 2020 the property was closed for the design and construction of a new multimillion-dollar facility. As well as complementing the old homestead, the addition would greatly enhance the enjoyment and experience of guests.

Stephen King’s magnificent estate entered a new and exciting chapter when, in June 2021, it was reopened as ‘Kingsford’ – suitably rebranded to embody the property’s past, present and future. 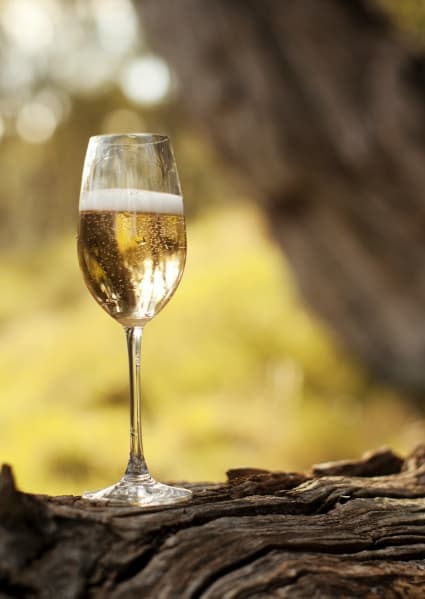